made for healthy habits 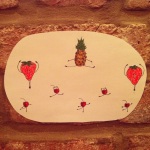 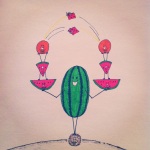 made on some downtime

Forget Toy Story… What do the books do when the Librarian’s away?

made as Holly Golightly

Audrey Hepburn was always one of my favorite women, and Breakfast At Tiffany’s is definitely in my top ten where favorite movies are concerned.

A few nights after this Golightly-success I tried making a few other looks from the movie (pink dress, cat mask), but they didn’t work out as planned. The bun-work Holly sported was pretty intricate for each outfit and I just couldn’t get it in the mindset I was in (one beer and one tequila shot inebriation). It just didn’t work out.

It is very good, however, that Audrey Hepburn worked out for the world. She represents the type of underdog story that doesn’t really happen now-a-days what with instant fame shows, reality television, youtube, yada yada, etc., and so on.

Audrey Hepburn was not only important in film, but also in activism for children around the world through UNICEF. Pretty sweet.

And for dessert she would eat a Granny Smith.

But in all seriousness, I do hope that there are young girls out there that know who Audrey Hepburn is and can look up to her as a positive role model. With all there is out there to get starry-eyed over it’s worrying how the young-folk are interpreting all this garbage into how they should actually act in real life.

Pissing on boardwalks and flipping the bird through slurs of shit-storms isn’t exactly graceful.

Let’s all be more graceful.

made because I  would 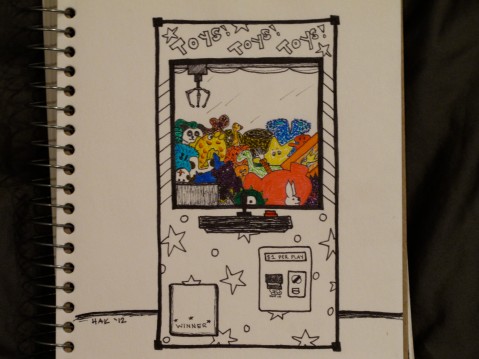 We were driving and talking about stuff and toy machines and my friend Jenna said, “That sounds like something you would draw.”

I don’t actually like these things though. I always wanted something awesome from them but could never win anything. I much prefer Skeeball.You reap tickets for your efforts instead of shame.

made at the laundromat

I did laundry last night and it was simply horrible because it always is. I did not make these super villains last night, however, because I forgot my sketchbook (making it more epically awful to be there)… Otherwise there would have been a Demonic Dryer to join forces with these two.

This Is A Girl’s Bookshelf And…

made for International Women’s Day

I stretch the truth.

Interestingly, of all days,  I had a moment this afternoon where my celebrated gender was moderately offended through a slight made by one nnnnot of my gender.

No matter how far (we’re lead to believe) we’ve come as a society there are so many that were left off somewhere long ago on the timeline of equality… There are definitely folks missing out on some serious teachings of the golden rule up in here.

It’s not impossible to find an extra beat of the heart for some empathy, to take the time to appreciate each others’ worth no matter who, what, or how. We weren’t actually created equal and there’s way more than face value to consider.

I am woman and that’s only the beginning!

That Zombie’s Got Heart, Too

made another warmhearted walker 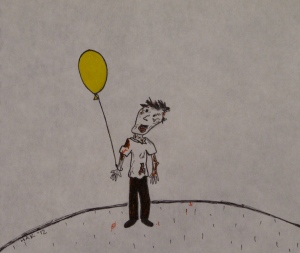 It’s funny to imagine zombies in tender and innocent moments…

That’s not really their purpose.

My Own Week with Marilyn

made one a day… a while ago.

Diamonds Are A Girl’s Best Friend 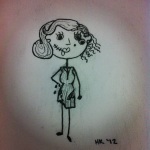 I made these a month or two back when I was in a celebrity stick-figure kick for a few days or weeks in a row. I have quite a few on stand-by to be shared in blog form at later times. It’s not that I forgot I had them catalogued digitally on my phone, but… I forgot I had pictures of them on my phone.

My biggest goal with these was just to make some recognizable cuties and enjoy their stick features; so expect some more to come the HANZZmade way including Audrey Hepburn, Betty White and some Gleeks.

I went farthest with Ms. Monroe by making the five different looks from a few of my favorite movies of hers, with one bred from Friday the 13th imagination waves.

S’nothin’ wrong with a little carnage.

To celebrate this second centennial of postings I decided to math-out the number 200 in 100 different representations.

Lots of math for lots of posts… which is true to life! Mathematics are our logical representations and explanations of the world around us. We rely on our arithmetics to relay our perceptions.

How artistically numeric. Numerically artistic? …or something.