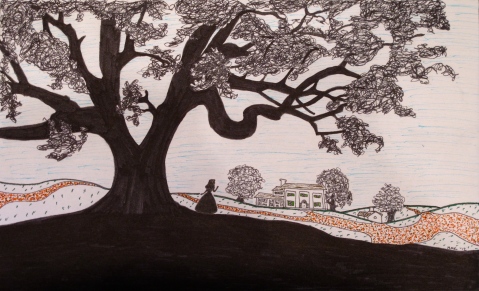 Actually, I drew out this 1939 Oscar winner yesterday and planned on making a few others as well (West Side Story, Silence of the Lambs, Titanic maybe…) in celebration of the Award show I wasn’t watching.

This doodle took a little longer than anticipated (I could have watched Gone with the Wind in its entirety and a half).

It was the tree… Trees always have so much going on.

I used/relied on Google images to help me capture the picturesque plantation, but only had it in my heart to sketch in a silhouetted Scarlett. I realize now I could have found time for a Rhett Butler – stepping in from the other side of the tree… returning because he DID give a damn!

I’ll think of it tomorrow 😉