Just a few years ago, the Harry Potter book series was complete and soon followed the film series that was adapted from it.

To commemorate the magical moments of those books and films, I started making an animated tribute series, Remembering Hogwarts. In a very short amount of time I animated scenes from the first three Harry Potter tales, but then took a very long time to create a scene from the fourth, The Goblet of Fire.

Though I had a strong vision of what I wanted to do (I made the background in February of 2012), the thought of how much time it would take to build the additional scenery and props (trees, tents, fires) and hire all the extras (Death Eaters and Victims) was daunting – and on top of it I had to shoot and edit??  Needless to say, I kept this project in the background (on my dresser) for quite a while.

made a scene from The Goblet of Fire

The Forest at Nighttime 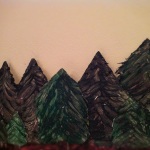 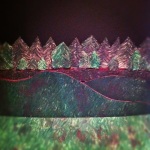 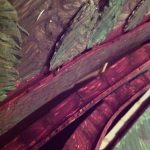 I’ve held off on a fourth installment to my Remembering Hogwarts series for quite a while, and with good reason. Harry Potter and the Goblet of Fire represents a pretty epic turning point in the series as a whole, so I needed to make sure I could think out a scene that could match that kind of grandeur.

It took me three days to make the set, one afternoon to each part (trees, hills, pathways), which fits neatly atop my dresser.

Having the last week off from work made it easy to squeeze in the craft-time for this project, but there’s a lot more making to do before I can actually follow through with the movie-making.

made a scene from Prisoner of Azkaban

Can you believe it?
This third scene in my Remembering Hogwarts Series is really more than one!

I spent A LOT of time on set and prop design for this vid, building an entire car of the Hogwarts Express, the end of Platform 9 3/4 AND an unattended snack trolly. The “location” offered tons of opportunity to play up details and background animation. I’m pretty proud of the  scenery as it moves with the train out of London, through city and forest, towards Hogwarts Castle. I used receipt paper for the effect… Talk about an obsolete item- I had to buy a 12 pack to get the 3-feet of slim, rolled paper I needed for this project… And that was a success only had after traveling to four different stores.

At least they have teacher discounts at Office Max.

I might have purchased Draco on Amazon just for this scene.

I’m really a miniature crafter – most things I end up creating are on a very small scale, though through photographic magics, appear a heck of a lot bigger on the interwebs.

This jacket is no exception.

I’ve been heavily focused on making props for my next animated short (Remembering Hogwarts: A Scene from The Prisoner of Azkaban) and debated on whether or not this specific detail was necessary for production.

As it turns out:

It is…
Mostly because I REVEL in details – the smaller the better.

And this jacket is tiny: It’s vertical length measures a mere 2 1/2 inches, with an armspan of 3 1/2 inches.

The frayed edges are not a product of the thing being so-darn-small, but are there on purpose. This is a werewolf’s blazer after all, and I don’t think “pristine” is a describer for such a creature’s belongings.

made a scene from Chamber of Secrets

Keep your brain’s guessing for Prisoner of Azkaban!

I don’t have any scars to prove I faced the most deadly dark wizard lord. I’ve never felt the burn of a curse striking my skin or the force of one leaving my own wand.

I’ve watched, re-watched, read and re-read about a boy named Harry Potter and his life, ever interrupted by the prospects of death by magic. You can refer to me as a fan of the series, but I belong in the “dedicated from the beginning” class of fandom.

In 1998 when Harry Potter and the Sorcerer’s Stone (book 1) was published in the United States I was in 7th grade and a reader. Having frequented Borders Books and Music at least every other week growing up, it still comes as a surprise to me that I didn’t find Harry Potter first. My mother had found The Sorcerer’s Stone hoping its boy adventure elements would strike interest in my younger brother…

To date I’m quite sure he hasn’t finished it.

I, on the other hand, snagged the snitch right away.

After finishing whatever-I-was-reading-at-the-moment I found Harry, Ron, Hermione and Hogwarts. Racing through book one with a lightning-bolt-shaped mark on my heart, I immediately followed the trio through the Chamber of Secrets (book 2: SAVE GINNY!) and the saving of the Prisoner of Azkaban (book 3: SAVE SIRIUS!)

Then all the waiting began…

The Harry Potter series is notorious for the waiting game it has put fans through – ebbing its culture with curiosity and a desire for more.

When Goblet of Fire (book 4) was finally released the summer of the millennium, my mother drove me to four different bookstores on August 1st to ensure my personal copy. It was clear then, and especially over the past thirteen years of Potter, that I have not been alone in the rapture of getting more from the series. With each release – of films and texts – there’s been both story and experience to gain, with especially obvious dedication on premiere nights.

made since he usually did ;P

My first midnight opening (see above) not only involved homemade iron shirts, but also a 9-hour ritual of line-waiting outside the theatre (complete with Harry Potter Uno [by the way – thanks for going through that, Ryan ;p]).  Subsequent years have involved buying-off a cousin for a good line spot, Every-Flavored Beans flavor challenges, tube tops and tattoos (see bottom) and, most recently, forcing wakedness on a school(work) night in the rain with an impending cold.

As for this Thursday: midnight, with this Deathly Hallows finale , it’s hard to know if I’ll be overcome with tears or laughter from this half-a-lifetime journey’s end.

The waiting game may actually be over.

Unless someone wants to help me write Harry Potter: The Musical. 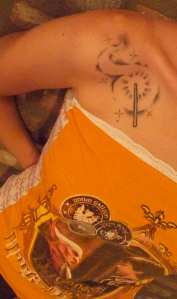 made a scene from Harry Potter and the Sorcerer’s Stone – memories!

made to celebrate an end

This HANZZmade Banner hangs from now until Harry Potter‘s birthday on July 31st.

Afterwards I would like to move on to a topic that lies behind the veils of YOUR imagination!

Please make suggestions for a new banner theme to be mounted atop HANZZmade.org by commenting on this post or emailing thoughts 🙂

I open at the close